Who Cares? Scotland, the leading advocacy organisation for Care Experienced people, is proud to announce Louise Hunter as its new Chief Executive. 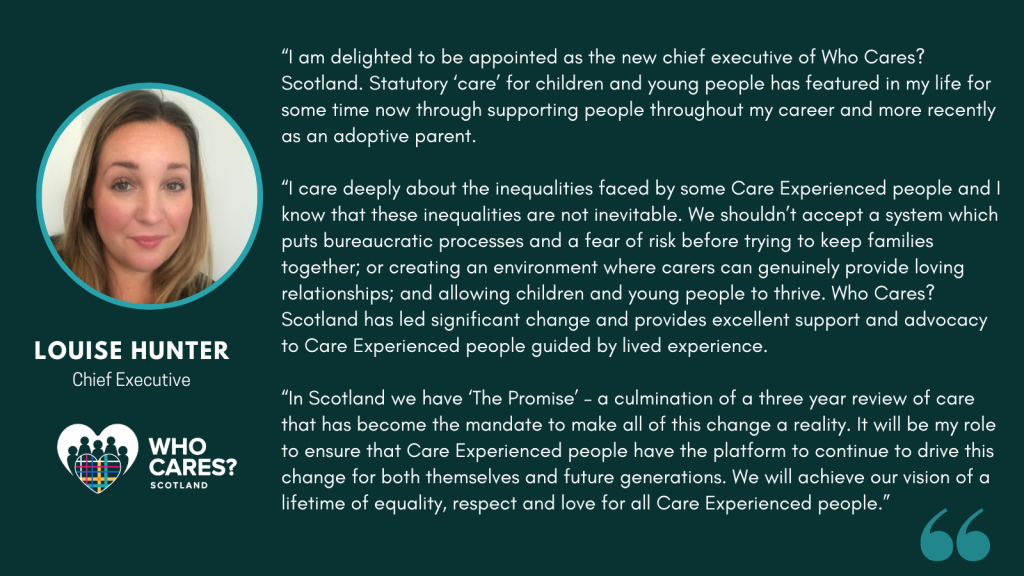 – Louise Hunter to start in December 2020

Who Cares? Scotland, the leading advocacy organisation for Care Experienced people, is proud to announce Louise Hunter as its new Chief Executive .

Louise has pursued social justice and fought for equality throughout her career. As a support worker, Louise challenged the practice of Care Experienced people moving their belongings around in binbags.

As a service manager, she stood up for young people when local residents campaigned to reject a children’s home in their area. As an adoptive parent, she has advocated for her adopted son to understand his own identity and maintain a relationship with his brothers and sisters.

“I am delighted to be appointed as the new chief executive of Who Cares? Scotland.  Statutory ‘care’ for children and young people has featured in my life for some time now through supporting people throughout my career and more recently as an adoptive parent.

“I care deeply about the inequalities faced by some Care Experienced people and I know that these inequalities are not inevitable. We shouldn’t accept a system which puts bureaucratic processes and a fear of risk before trying to keep families together; or creating an environment where carers can genuinely provide loving relationships; and allowing children and young people to thrive. Who Cares? Scotland has led significant change and provides excellent support and advocacy to Care Experienced people guided by lived experience.

“In Scotland we have ‘The Promise’ – a culmination of a three year review of care that has become the mandate to make all of this change a reality. It will be my role to ensure that Care Experienced people have the platform to continue to drive this change for both themselves and future generations.  We will achieve our vision of a lifetime of equality, respect and love for all Care Experienced people.”

Louise is currently the Chief Executive of Visibility Scotland. At Visibility Scotland, she has led the charity to affect positive change and improve outcomes for visually impaired people of all ages. Louise increased the direct provision of services; secured new public contracts; launched a social enterprise and brought the organisation to financial stability.

During a career grounded in the third sector and working with young people, Louise has spent time as Director of Operations at Ypeople, where she led a team of 160 people in the provision of housing and mental health support to young people across Scotland. Louise brings a strong understanding of the challenges faced by young people and service providers.

She currently serves on the board of the Scottish Refugee Council, chairing their Finance and Audit Committee. Louise is also a member of Police Scotland’s National Independent Strategic Advisory Group (NISAG), where she provides advice on equality and diversity issues in all aspects of Police Scotland. 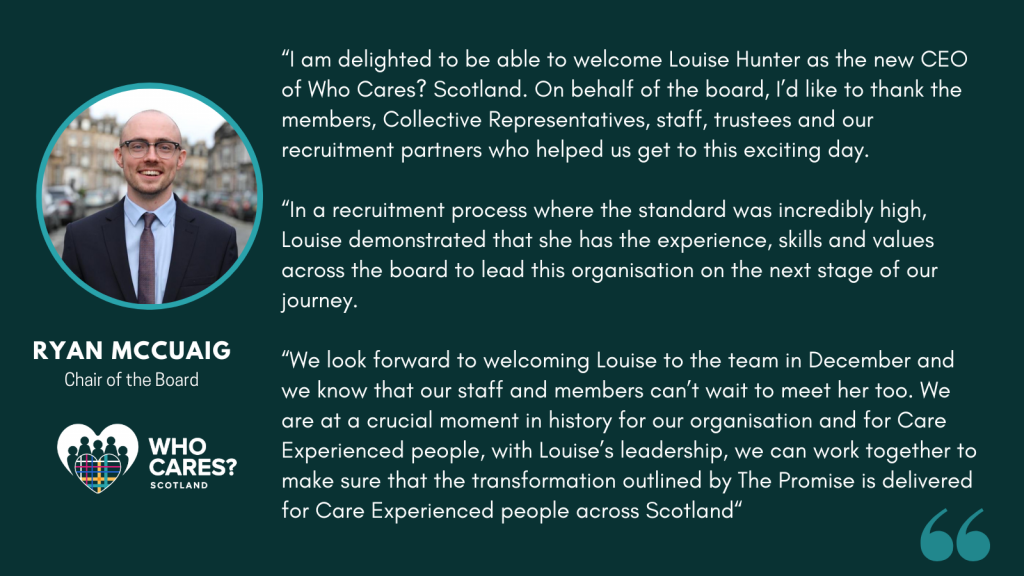 Ryan McCuaig, Chair of Who Cares? Scotland’s  Board, said:

“I am delighted to be able to welcome Louise Hunter as the new CEO of Who Cares? Scotland. On behalf of the board, I’d like to thank the members, Collective Representatives, staff, trustees and our recruitment partners who helped us get to this exciting day.

“In a recruitment process where the standard was incredibly high, Louise demonstrated that she has the experience, skills and values across the board to lead this organisation on the next stage of our journey.

“We look forward to welcoming Louise to the team in December and we know that our staff and members can’t wait to meet her too. We are at a crucial moment in history for our organisation and for Care Experienced people, with Louise’s leadership, we can work together to make sure that the transformation outlined by The Promise is delivered for Care Experienced people across Scotland“

Louise joins Who Cares? Scotland, and its 2,800 members, at a critical moment.

Following the delivery of the Care Review, Who Cares? Scotland has resolved to work with The Promise to ensure that long overdue change is delivered for Care Experienced people. The organisation is also supporting the Scottish Government to deliver professional advocacy to every child attending a children’s hearing in Scotland.

During the COVID-19 lockdown, Who Cares? Scotland’s staff sprung into action, delivering financial, practical and emotional support to 850 people, unearthing experiences of poverty, isolation and exclusion that had been missed and ignored by other services.