Learn how our members voices shaped the Children (Scotland) Bill 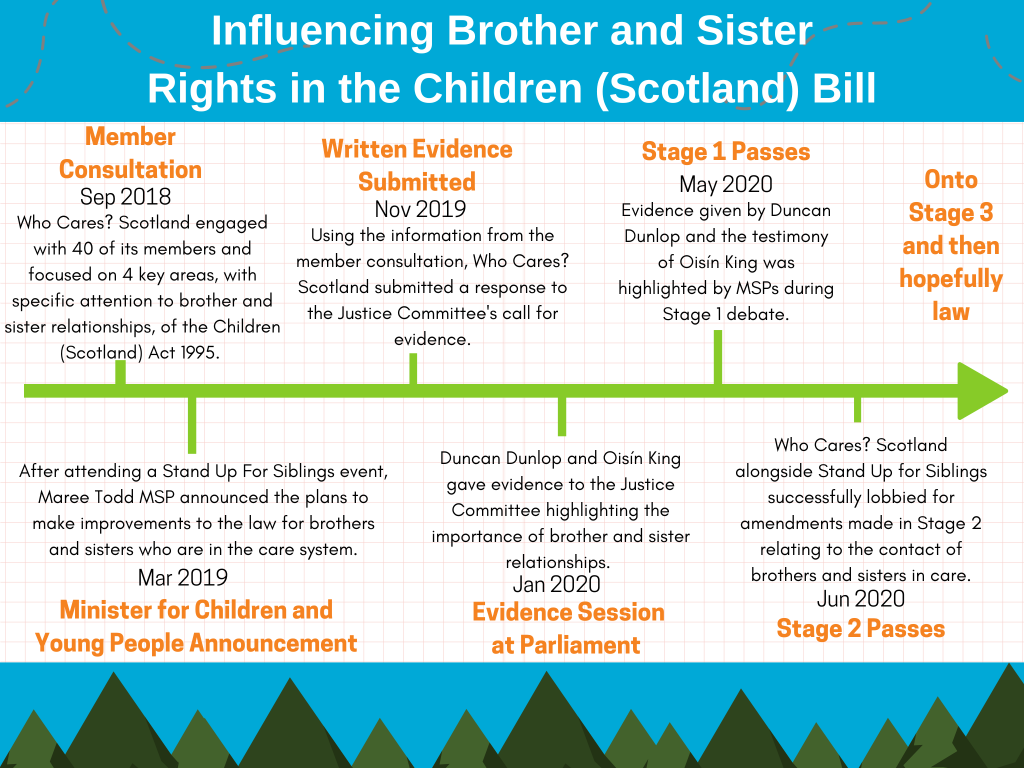 Since March 2018, Who Cares? Scotland has worked alongside a variety of organisations to campaign for the rights of brothers and sisters in care to be protected in law.

The Stand Up For Siblings (SUFS) coalition raised the profile of an issue that Care Experienced people have told us about for decades. They want their relationships with their brothers and sisters to be protected.

We worked with SUFS to strengthen the sibling provisions during Stage 2 of the Children (Scotland) Bill by lobbying for change to section 10 of the Bill. Previously, it stated that a local authority will have a duty to

“…take such steps to promote, on a regular basis, personal relations and direct contact between the child and [their sibling where] both practicable and appropriate.”

Alongside SUFS, Who Cares? Scotland successfully asked for the term ‘practicable’ to be removed from this duty, better protecting facilitation of contact between brothers and sisters.

On 25th August 2020, the Bill was debated for the final time by MSPs at Stage 3 in the Scottish Parliament. Alongside SUFS, Who Cares? Scotland wrote to MSPs ahead of this final debate to urge them to support several more changes (called ‘amendments’) to the Bill.

These changes were successfully passed meaning there is now a more inclusive definition of who counts as a ‘sibling’. The changes also included adding a new way for people to participate in Children’s Hearings, creating a potential route for siblings to be part of their brother’s or sister’s Hearing, if it is in the best interests of the child.

In January 2020, Who Cares? Scotland member Oisín King and our CEO Duncan Dunlop shared powerful evidence at an oral evidence session with the Justice Committee who were reviewing the Bill.

Oisín shared his experience of being separated from his sister, which made a significant impact on MSPs.

Duncan spoke of our advocacy evidence which shows concerns about how resource-led decision-making can lead to many sibling relationships being disrupted. He argued, alongside CELCIS, that ‘practicable’ should be removed from the Section 10 duty, as it allowed for resource-based decision making about sibling contact to remain unchallenged. 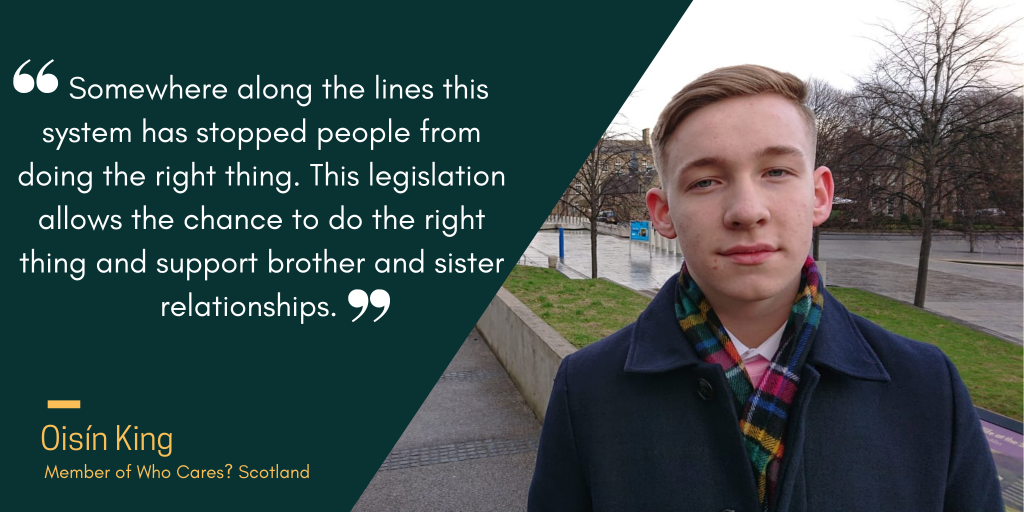 We also sent another important contribution directly to MSPs ahead of the oral evidence session – a special edition of the BBC ‘File on 4’ programme on sibling separation. This programme featured Who Cares? Scotland member Theighan McGirr and her sister Sophia speaking about their experiences of being separated. It further demonstrated to MSPs on the Justice Committee just how vital it is that the new sibling provisions in the Bill create real change for Care Experienced people.

During the Stage 1 debate of the Bill, MSPs from all parties cited Oisín’s evidence as proof of what can happen when the care system does not protect sibling relationships. This led to MSPs Neil Findlay and Liam Kerr to raise the issue of the word ‘practicable’ during the debate, as the Scottish Government had decided to keep the wording in at Stage 1 of the Bill. The evidence shared by Oisín continued to have impact throughout the Bill process, being cited again by MSPs in the Stage 3 debate in Scottish Parliament.

Working with Stand Up for Siblings (SUFS)

Ahead of Stage 2 of the Bill, we worked alongside SUFS to prepare a joint briefing that MSPs utilised to lobby the Minister for Community Safety, Ash Denham. This briefing clearly outlined our joint position on the need to remove ‘practicable’ from the duty to promote sibling contact and presented a variety of evidence showing the need for Section 10 to be strengthened by further demonstrating the current fragility of brother and sister relationships within the care system.
This lobbying effort resulted in the Minister lodging an amendment in Stage 2 on behalf of the Scottish Government to remove the word ‘practicable’ from this new duty on local authorities to promote sibling contact. This was passed unanimously by the Justice Committee. 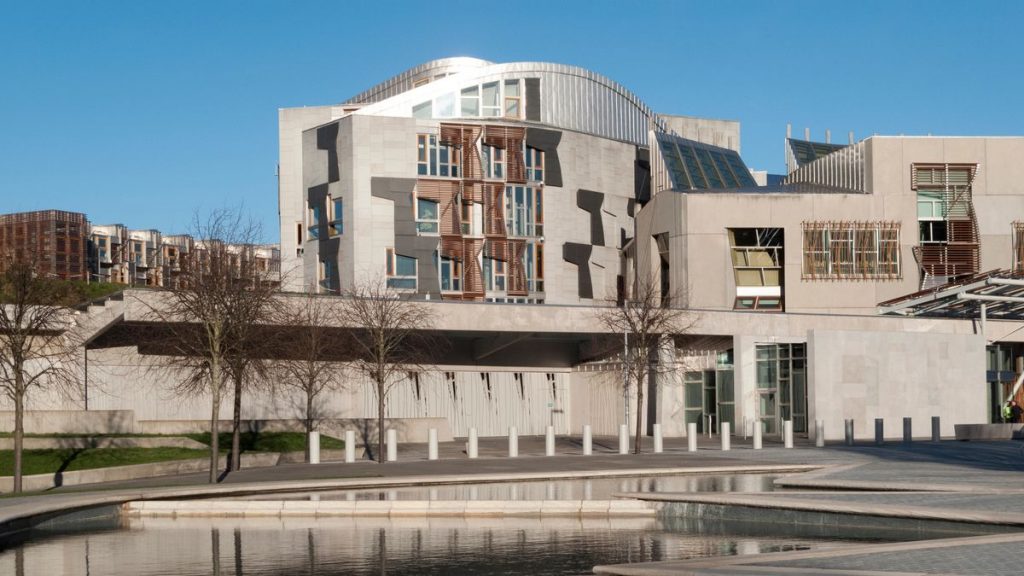 This success means the new duty on local authorities to promote sibling relationships is much stronger.

We then worked again with Stand Up For Siblings ahead of Stage 3 of the Bill and sent another joint briefing to MSPs outlining our support for a variety of final changes. This briefing also highlights some further issues that we want to see addressed when accompanying guidance is produced, such as:

We are delighted the amendments we supported at this final stage were passed by MSPs. On 25th August 2020, the Children (Scotland) Bill passed into law, which marks a significant milestone for sibling rights.

The progress made at the various stages of the Bill is thanks to the incredible Care Experienced people that have shared their experiences of sibling separation with us, both publicly and through our advocacy relationships, for over 40 years.

A change in law is the first step and further work will need to be done to make sure Care Experienced people feel the benefit of this, including the creation of clear guidance on how this new law should be applied. Until these rights are realised in practice, we will continue to campaign for the rights of brothers and sisters in care.

Members of Who Cares? Scotland sharing their experiences about being separated from their brothers and sisters: